It can be easy to feel gloomy and maybe a bit helpless from news of the coronavirus pandemic. While we continue practicing social distancing, donating to local food banks, etc., could we also set the stage for a healthier and more equitable city, with less parking? Here are some ideas that cities are adopting:

It’s difficult to abide by the 6 foot rule to follow social distancing guidelines when many sidewalks barely allow two pedestrians to pass by each other with a foot of space in between. In fact, most sidewalks themselves may be hazardous, as some studies show that people should abide by at least a 20 foot rule.

To create safe walking conditions and perhaps allow a little exercise (recommended with a mask or face covering if possible), city leaders can consider slowing cars on streets or temporarily closing them. In Oakland, an emergency measure will slow down 74 miles of streets to vehicular traffic to give pedestrians, joggers and cyclists more room for social distancing. The widespread street “closures” also allow plenty of neighborhoods throughout the city to benefit, and not single out any particular streets for more foot traffic.  Philadelphia, Denver, Minneapolis and other cities also have similar measures but on smaller scales. In Washington D.C., some parking spaces (unofficially) have been temporarily replaced by a “pandemic extended sidewalk”, giving pedestrians a lot more comfort room. 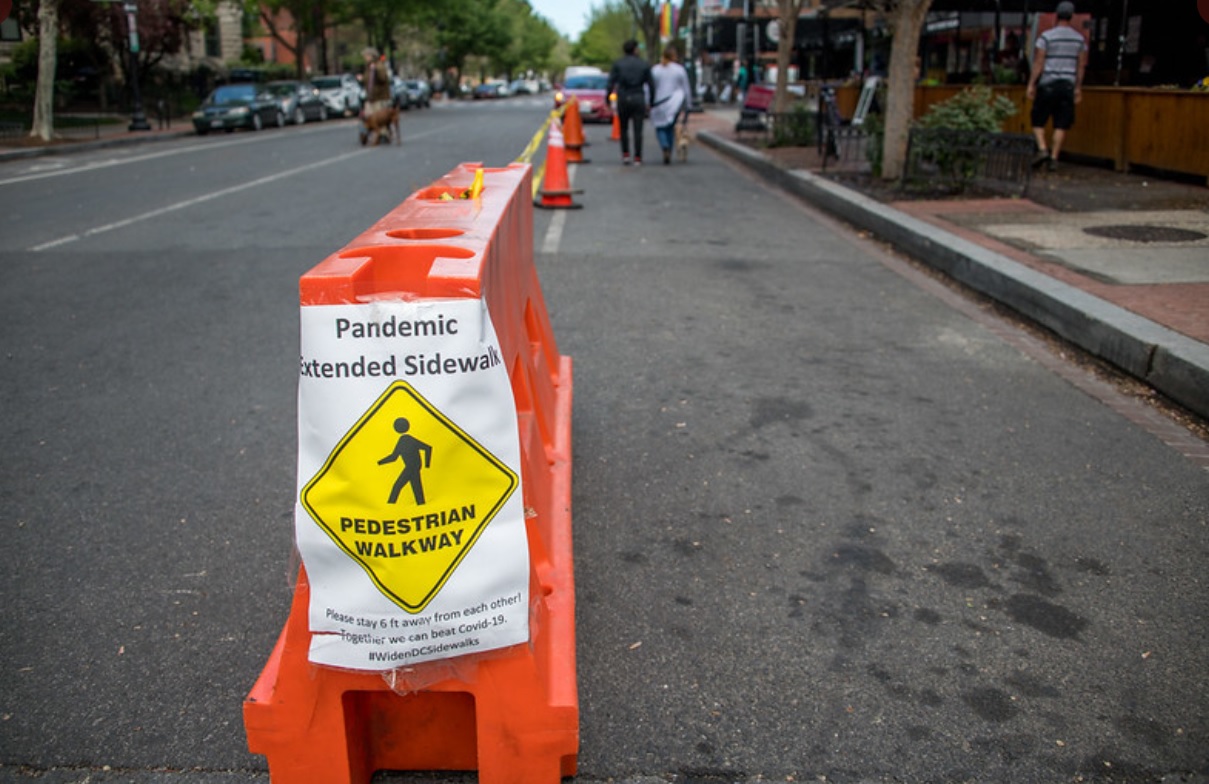 Could temporary efforts such as these convince enough people that it’s worth trading a few parking spaces in exchange for more permanent pedestrian-friendly spaces?

With the decline in public transit ridership due to transit workers who have tragically been infected or died from the virus, and the heightened risk of infection on buses, more people are choosing active modes such as walking and biking.

Cities around the world such as Berlin, Bogotá, Budapest and Mexico City have quickly installed new bicycle lanes. In the US, some cities have introduced street closures, but some have also introduced pop-up cycling to encourage exercising.

Whether the pandemic will help us focus more on making streets more accessible to pedestrians and bicyclists is an open question. New York City recently revealed massive budget cuts of $1.3 billion that would have supported street safety and bicycle lane projects. These cuts have a disparate impact on the most vulnerable, the “essential workers”, who must travel long distances to work as grocery workers, hospital workers, delivery workers, etc. in the middle of this pandemic. With limited travel options, workers have a challenging dilemma: taking expensive car trips or taking the train or bus which may be packed with riders. For some populations, car ownership may actually increase as people choose cars over transit, but for the many Americans struggling to make ends meet, cars will increasingly become a financial burden. However, cities can encourage more residents to choose biking if adequate infrastructure (probably replacing parking) is put into place. In New York City, bicycles are a lifeline for those who continue commuting to hospitals, for delivery workers and others who are seeking exercise.

The pandemic has made clear that we must support the most vulnerable communities who are at a greater risk of infection, because their health is the public health. In New York City, where African Americans and Latinos have double the rate of infection as whites, having an alternative mode of transportation that is safer and low-cost could lower infection rates. A recent study showed that people (mostly minorities) that have been exposed to higher levels of particulate air pollution (from car fumes and especially highways) are more likely to die from COVID-19 infection than patients with clean air.

But if the city builds more lanes, will residents use them? According to the NYC bikeshare company Citi Bike, customers have already taken 67 percent more rides compared to the same period last year.

How else can parking reform affect public health?

By supporting more active modes of transportation (at the expense of parking spaces), we help lower air pollution, which is also a co-factor of coronavirus deaths. A Harvard study found that a small increase in exposure to particle pollution is associated with a 15% increase in the COVID-19 death rate. A high level of pollution may also explain the higher death rate in Northern Italy (12%) compared to the rest of Italy (4.5%).

More than ever, it’s important that we take care of our mental and physical health. So it’s important to note that obesity is another cited factor of COVID-19, which may explain the higher death rate in the United States compared to other countries. In New Orleans, where the death rate is twice as high as New York City, doctors and health officials say that the higher rates of obesity, diabetes and hypertension among New Orleans residents make residents more vulnerable to the virus. While some of the data may be preliminary, obesity is also cited as a factor for above-average death rates in France and in Mexico. By investing in more safe and spacious pedestrian sidewalks and walkways (instead of prioritizing parking and streets for cars), cities can create opportunities for residents to adopt more active lifestyles instead of being constantly sedentary at home (while following social distancing guidelines), and to get fresh air (especially if indoor air quality may be poor).

We can reduce the spread of infection, improve public health and prepare us for the next pandemic, if we rethink how much parking and space we devote to cars. Already there are signs that employers are rethinking how we commute and that cities are rethinking the curb. Will cities adopt more permanent changes to their streets as a result of COVID-19? Only time will tell.